In the genealogy of my household felines, the last in a long and illustrious line was April, a petite short-haired cat of black attire with a white star on her chest. Tracing her history through the matrilineal lineage, she was birthed by Sparkle, who begat three offspring: Lucky, the eldest male, a second Tiger cat who did not survive birth, and the delicate and skitterish April.

Alas, April lost her mother at an early age due to the vicissitudes of life as a cat in the Santa Monica Mountains - an environment seething with natural predators. Henceforth, our little Miss was the Cinderella of the household, "dissed" by her sibling and an uncle named Sugar, a fat cat who rarely vacated the prime spot on the master's bed and guarded it with a vengence.

The lonely and defiant April thus took to the outdoors for a good part of her adult life, showing up on the doorstep only several days out of every month or when a rain storm was imminent. For the next 19 years, her pattern remained consistent, and members of the human household engaged in hot debate as to whether she had another family or was a superb survivor of the wilds.

Although her whereabouts remained the object of speculation, a pet psychic did relay the following message from the wanderlust kitty when she was approximately 8 years old:

"My roaming is nothing personal. It's about me, not you. I appreciate that I'm always welcome at your house. I really enjoy visiting. Maybe someday, when I'm old and need a soft bed and easy food, I'll stay with you. I have lived the best life for me." 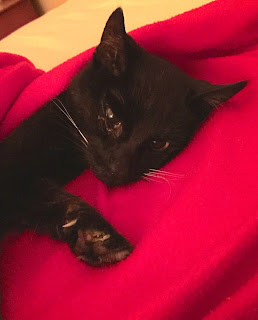 April, a few hours before transitioning

Our beautiful kitty passed away in the early morning hours of August 21, 2015, on the prime spot of her mistress's bed, surrounded by soft pillows and Love.
at August 31, 2015